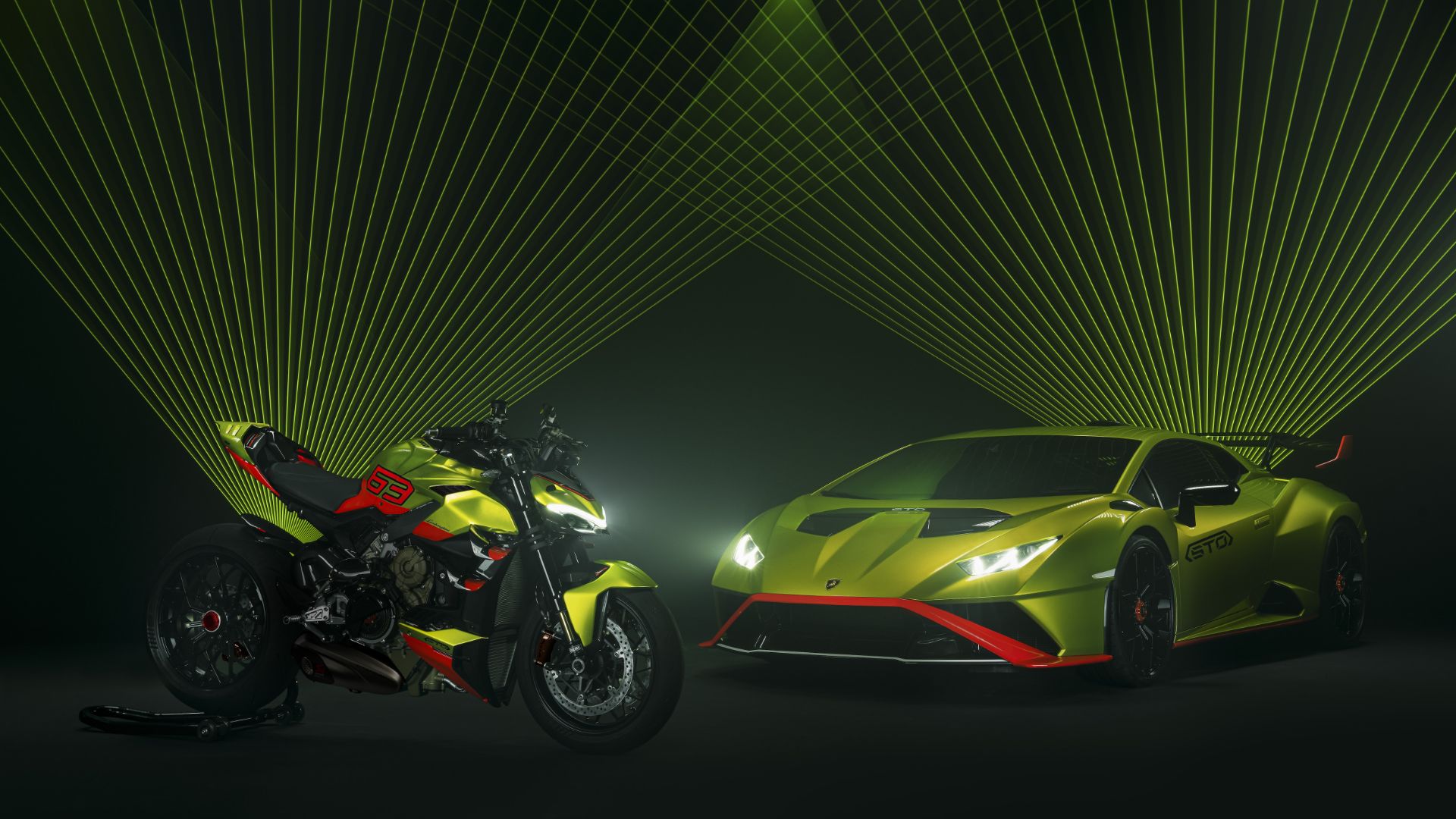 From the heart of Motor Valley, in the prestigious context of the San Marino and the Rimini Riviera GP, the Ducati Streetfighter V4 Lamborghini has been unveiled to the public. The most attractive and exclusive Ducati Streetfighter ever produced is a motorcycle that perfectly embodies the values ​​of extreme performance, sportiness and exclusivity shared by Ducati and Lamborghini, two brands of excellence that have contributed to writing the history of Motor Valley and that renew and enhance their collaboration with this special project. The final result is a magical combination of technology, performance and beauty, capable of making fans dream from the very first glance. 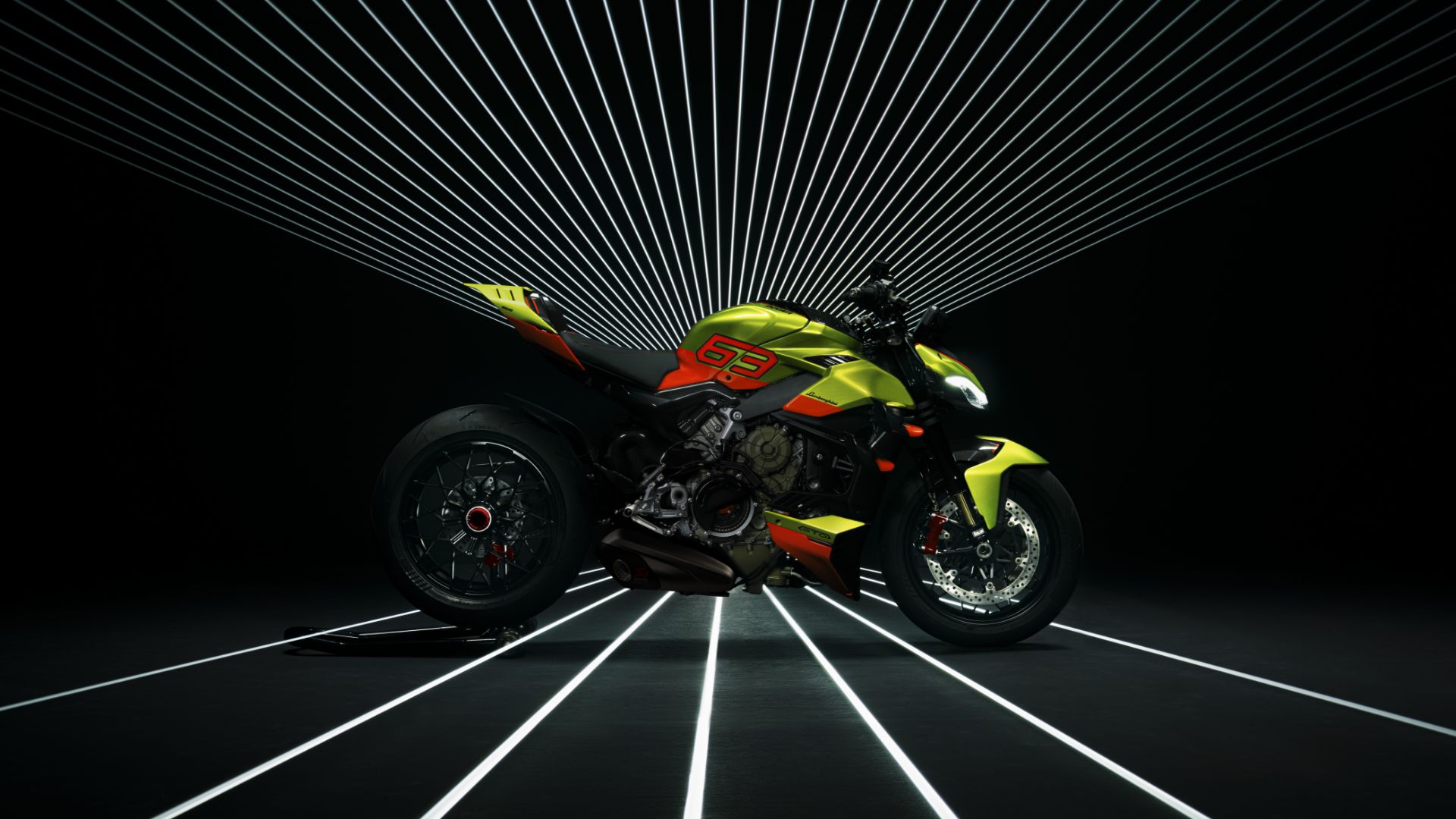 By applying the technical base of the Panigale V4 S '23 and integrating elements that characterize the DNA of Lamborghini, Ducati has created a hyper-exclusive model. The bike will be produced in a numbered series limited to 630+63 units and it reworks the concepts that gave life to the Lamborghini Huracán STO.

The Huracán STO is the highest-performing model ever made of the Huracán family, a supersports car created with the sole purpose of offering all the sensations of sports driving and the technology of a real racing car in a model approved for road use. An approach with light materials and functional design come together to express outright performance.

The fusion of Lamborghini and Ducati design


The Ducati Streetfighter V4 Lamborghini is enhanced by further precious components: adjustable rider foot pegs and lightened brake and clutch levers in billet aluminium (in collaboration with Rizoma), and the heel guards, the saddle pad, dashboard cover and ignition switch cover as well as the sprocket protection made of the special carbon fibre used for the bodywork components. The same carbon fibre is used in parts assigned to heat protection in the covers of the rear head and manifolds of the relative cylinder bank, but also in the headlight support, in the rear mudguard and in the rear subframe guards.The side view of the Ducati Streetfighter V4 Lamborghini is finally also enhanced by the Akrapovič exhaust silencer in titanium with carbon fibre end cap.


In addition to the 630 Verde Citrea/Arancio Dac units, Ducati is offering an even more exclusive series of 63 bikes, called Speciale Clienti, which are only available to 63 Lamborghini customers. These customers, through a direct collaboration with the Centro Stile Ducati, will be able to configure their Ducati Streetfighter V4 Lamborghini Speciale Clienti with body colours and wheels exactly like their Lamborghini. It will also be possible for them to choose the colours of the brake calipers among those included in the palette (Yellow, Red, Black and California Orange, in addition to the standard colour) and the details of the saddle among the four available versions.

The Ducati Streetfighter V4 Lamborghini was unveiled on the occasion of the San Marino and Rimini Riviera Grand Prix at the Marco Simoncelli World Circuit. The collaboration between Ducati and Lamborghini, which had already given life in 2021 to the Siàn-inspired Diavel 1260 Lamborghini - so successful that it sold out in a few days - will also continue on the MotoGP circuits. In fact, starting from the San Marino and Rimini Riviera Grand Prix, the shield of the Sant’Agata Bolognese company also appears on the Desmosedici of the Ducati Lenovo Team.