Fabio Taglioni, the Ducati genius who built the legendary Desmo. 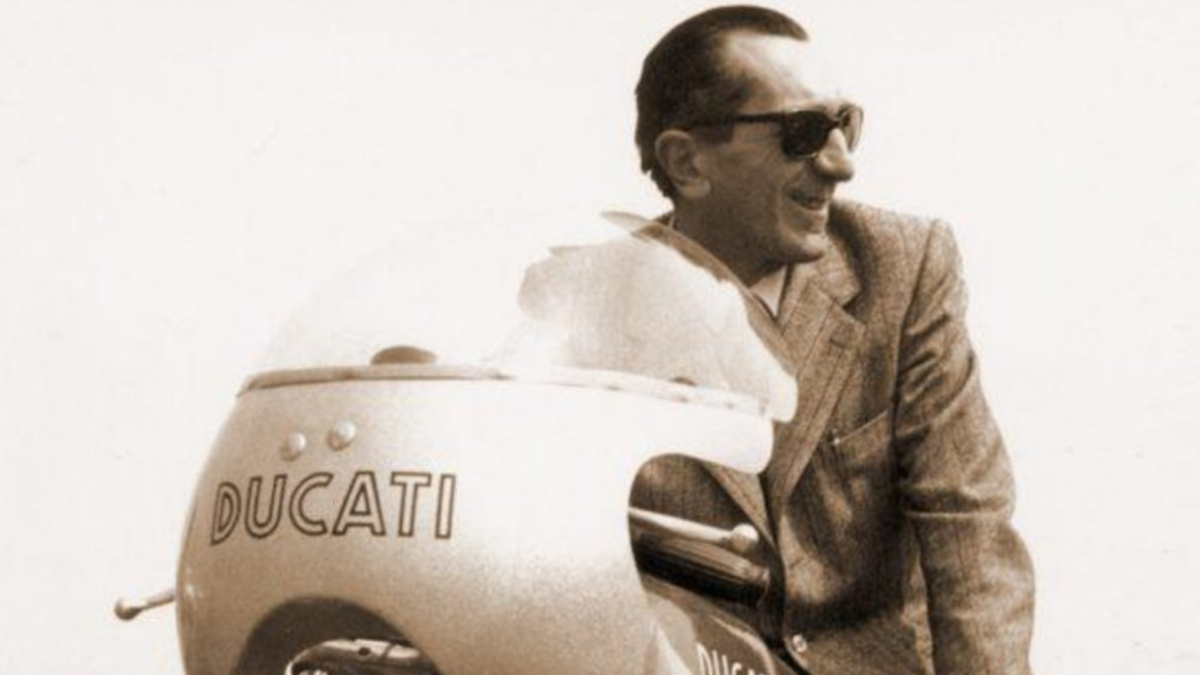 Engineer, inventor and designer, over the course of his thirty-year career he authored over a thousand projects, including the trellis frame, the “L” engine and the desmodromic system with which he inextricably linked his name to Ducati. We are talking about Fabio Taglioni, born September 10, 1920 in Santa Maria in Fabriago, a fraction of Lugo di Romagna.

Thanks to his father’s mechanical workshop, already at an early age Fabio entered, frequented and came into contact with the motoring world, which would forever become an integral part of his life. He graduated in Engineering at the University of Bologna and in 1949 he obtained the chair of Mechanics and Design at the Alberghetti Technical Institute in Imola, where he taught for a short period before embarking on his professional career.

At the same time he began his first collaboration as an engineer and designer at Ceccato, a company that in those years began to produce the first auxiliary engines for road and sport motorcycles.

But it was his collaboration with Mondial, which started in 1952, which began to give notoriety to the name Taglioni. The Boselli Brother’s company, based in Bologna but known worldwide, achieved excellent results in the Milan-Taranto and Motogiro d ‘Italia cross-country races. Taglioni, whose engines had been decisive for Mondial’s victories, was not invited to the celebrations, and this lack of recognition pushed the engineer to look elsewhere for a place where his creativity could be fully explored. The company founded in 1926 with the name of the Scientific Society of Radio Brevetti Ducati, later evolved into Ducati Meccanica, in 1954 was trying to position itself in the engine market. In 1946 the Cucciolo was produced, but the following productions were not noteworthy enough to make Ducati one of the great Italian motorcycle manufacturers.

To complete its transformation, the company from Borgo Panigale needed a winning bike. The plant manager and CEO Giuseppe Montano understood that Fabio Taglioni was the right man at the right time. He contacted him and made his bet: he asked the engineer for a collaboration that would not have foreseen a salary for the first six months. Fortunately, at that moment money was not lacking for Fabio and, after hearing his wife’s opinion, he accepted the proposal.

Fabio Taglioni entered Ducati and invented the company’s first true racing bike: the Ducati Gran Sport “Marianna”, which was its protagonist between 1955 and 1957, winning several editions of the Milano-Taranto and the Motogiro d’Italia. The strategy to start participating in Gran Fondo races, instead of starting with the track, immediately paid off by bringing Ducati to full capacity in competition with the great motorcycle manufacturers of the time: MV Agusta, Moto Morini, Moto Laverda and Benelli.

Taglioni then started the Ducati racing team, the department that managed the official team competitions, choosing mechanics and pilots who were to become legendary. These included Gianni Degli Antoni, Leopoldo Tartarini, Francesco Villa, Franco Farnè and Giuliano Maoggi. In the 80s, two other Ducati pillars grew alongside Fabio: Gianluigi Mengoli and Massimo Bordi, who were to be the creators of the first four-valve liquid-cooled engine.

The 100 cubic centimeter engine of the Gran Sport “Marianna” served as a basis for Fabio Taglioni, planning the first displacement increases, the 125cc and the 125 double shaft.
In 1956, only two years after his arrival at Ducati, he made his 125 Desmo debut. The desmodromic distribution system was a real revolution for the company. Exploiting a direct mechanical system, and not the traditional springs, to bring the valves back to the closed position, the desmodromic system allowed Ducati to increase the performance of the engine with an elegant and refined engineering solution, which would become the trademark of Ducati motorbikes.

In a short time, the 125 Sport and 175 Sport road bikes arrived, derived from those seen on the track and in the streets in Italy. The arrival of small cars caused years of great upheavals in the Italian motoring world. The entry into production of the 1957 Fiat 500 caused the slowdown in the sale of motorcycles. In that year they retired from the Mondial, Gilera and Moto Guzzi competitions, while MV Agusta, Moto Morini and Ducati took over the new displacement categories.

Given the difficulties in Italy, Ducati began to look abroad too. It sold well in the United Kingdom and the United States, where in 1962 a new market channel was opened: the first Scrambler was born. In these fervent years, the Ducati engine participated unofficially in the European and world championships with motorcycles committed and delegated to other teams. But it was in 1971 that Ducati returned to major competitions and large-scale production, and the Ducati Scrambler entered into the European market.

In those years, Japanese motorcycle manufacturers began to release the first maxims and they needed to design something that could compete with them. Fabio Taglioni gave birth to the famous two-cylinder “L” racing bikes: the 500 Gran Prix and the 750 GT, the forerunner of the modern Ducati maximoto.

Great satisfactions and the Ducati legacy

But Fabio did not stop there. In 1977 he began designing the upgrade of the twin-cylinder engine by replacing the distribution with bevel gears with the belt distribution. He also added the first trellis frames. Taglioni’s career continued with important new successes, including various victories at the 24-hour Circuit of Montjuïc in Spain. Then followed the resounding triumph at the 1978 Tourist Trophy, with the Ducati 900 driven by the great driver Mike Hailwood.

At the end of his career, Taglioni introduced the 750 TT1 racing series, the TT2 and the 750 F1 road bike, which brought the rider Marco Lucchinelli to win the 200 Miglia di Misano in 1986, beating motorcycle legend Joey Dunlop, multiple champion of the TT World Championship. Projects that have become prototypes and prototypes that have resulted in racing bikes and street bikes. Thirty years of passion and production, conceived by the genius Taglioni. Fabio Taglioni died in 2001, but the memory and creativity of this man remain, with three main elements that consolidated the Ducati image: the desmodromic system, the “L” engine and the trellis frame. He is associated with the most noble, historical and innovative parts of Ducati.

The celebration of Taglioni’s legacy

In 1998 the Ducati Museum was inaugurated in Borgo Panigale, completely renovated in 2016 for the 90th anniversary of the founding of Ducati. Here visitors can explore the history and future, challenges and successes of the great motorcycle manufacturer. Among the many vintage motorcycles on display, there are many designed by the genius Fabio Taglioni, including the original Ducati Gran Sport “Marianna”.

The historic curator of the Ducati Museum Livio Lodi was one of the sources that tells the story of this character. Conveying his affection and greatest respect for such a central figure for Ducati, Livio recounted a man of great genius, full of thousands of ideas and passions besides from engines. From orchids to succulents, from parrots to oestrus for painting.

“He wasn’t just an engineer, he was something else.”