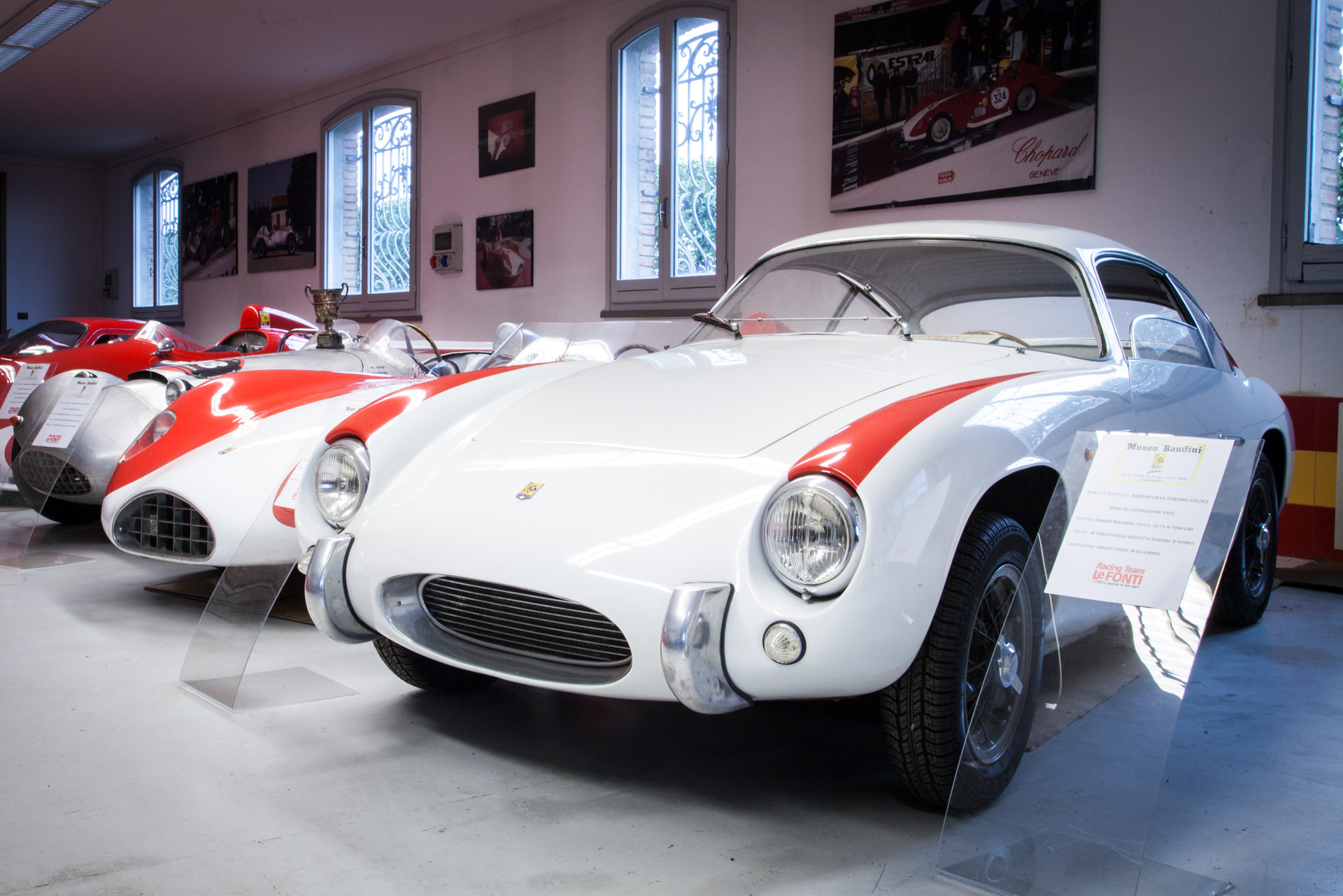 Dino Bandini and the Bandini, Automobile Collection, the custodians of the history of the legendary uncle Ilario.

If there is a word that can summarize more than any other the history of Bandini Automobiles it is the word unique. Both thanks to the extraordinary character that made it all possible, one of the most incredible figures in the Emilia-Romagna Motor Valley panorama and the unique quality of the pieces produced by this small manufacturer, a workshop of wonders with an exquisitely crafted character capable of keeping up with the big brands in the most important automotive competitions around the world.

75 unique pieces, handmade, piece by piece, by their father-creator, the designer, mechanic and driver Ilario Bandini. A Canova of motor racing that could be compared to Leonardo. A pioneer of aerodynamics thanks to his use of light materials, he immortalized in the sinuous and harmonious line of cars the perfect combination of design and technology.

Today, almost thirty years after his death, of the 75 models built between 1946 and 1992, only 47 remain. Nine of these are kept in the Bandini Automobile Collection, the collection founded by his nephew Dino, who remains today a proud and generous custodian of his family jewels and a point of reference for all Bandini car owners. It is he who daily, alongside trusted and selected restorers, takes care of the pieces that make up the collection. It is he who presides over the Bandini Historical Register, the archive that keeps track of all Bandini Automobiles for owners and aspiring buyers. It is he that every day, even on Saturdays and Sundays, welcomes visitors to view the Collection so that they can fully enjoy the enchantment of these incomparable prodigies for free.

“When a Bandini and a Ferrari are parked side by side, people tend to look more at Bandini, not Ferrari,” says Dino Bandini. “But only because Bandini are rarer,” he hastens to point out, as if he wanted to avoid even the smallest lack of respect towards the legendary Drake, who was a great admirer and personal friend of Ilario Bandini.

Mr. Bandini, how was this Collection born?
It was 1987, I was in New York. I happened upon an American car magazine, in which I saw an advert for an imaginary Bandini Formula Junior with rear engine published. It was obviously a resounding fake, because my uncle never built one, nor had he ever thought of creating a Junior with a rear engine. When I returned to Italy, I told him right away. “They are forging Ferraris, why shouldn’t they fake Bandinis?” was his reply. But at the time I was his only male nephew, and I experienced that episode as an insult to the family name. It was then that I made the decision to dedicate myself to the veracity of Automobili Bandini. This is how I began, between one patient and another (Dino Bandini by profession is a dentist), to browse through the Classic & Sports Car magazine and to send faxes. Several faxes. I sent them to vintage car dealers from around the world, to search for information and inform them of my interest in buying. I still remember the emotion of when I started to hear the phone ring off the hook, and the infinite joy I felt when I received a positive response. My first Bandini arrived in 1995, three years after the death of my uncle Ilario. I bought it in the United States, where Bandinis were well known because of the success achieved at the SCCA (Sports Car Club of America) championships. In those years a friend of mine from Dallas, owner of two Bandinis, helped me a lot. With him I reconstructed the history of cars for sale and organized transport in Italy, by sea across the ocean and then here to Villa Rovere.

This was the past. And what of the collection in the present day?
Slowly the Collection has grown to the point of practically becoming a museum. There is my uncle Ilario’s memorabilia, to support the nine cars on display that I show to visitors myself with a wealth of details and fragments of history, each time excited as if it were the first time. But I know where all the other existing Bandinis are also located, and I feel like the point of reference for all Bandini owners and enthusiasts. They contact me from all over the world, to get information on the possible values, the veracity and the history of cars. And what’s the latest news from the world of Bandini?
Recently I received the news of the birth of the first Bandini Club in Japan. And the sale, also in Japan, of a Bandini Saloncino, one of the four berlinettas built by my uncle, at a staggering figure of one million two hundred thousand euros. If we think that the old owner the car had spent “only” €400,000 you can understand how Bandinis are today an excellent economic investment.

What is the most valuable piece in the collection? And what piece are you most attached to?
The most prized piece is probably the one I just finished the restoration on: the Bandini GT 750 Zagato, the first two-seater covered to wear the Bandini crest. What I’m most attached to is the 750 International Sport, affectionately called Saponetta by my uncle because of its rounded shapes.

Why the Saponetta?
Because it is one of the first I bought, one of the most masculine, despite the name, and one of the most comfortable to drive. It is one of the two cars with which I participated in the Mille Miglia, together with the 750 Sport Siluro. And it is the car that won, two years ago, the First Elegance Competition in Monaco, in front of a Le Mans Ferrari, because an aunt of Prince Albert had fallen in love with it.

What impresses the visitors of your collection the most?
The craftsmanship with which they were built. The fact that all the components of these cars, from the chassis, to the engine, to the bodywork, were produced by my uncle Ilario. That he had completed them in sixth grade and had done so completely alone, first in Italy and then in Eritrea, until he was awarded, by the University of New York, an honorary degree in mechanical engineering, which was awarded only to Enzo Ferrari and Ferruccio Lamborghini. Is there any memory in particular of your uncle you would like to share?
There are many anecdotes about him, but there are two which I love to tell visitors of the Collection, because in my opinion they are the ones that best describe the him. The first is a sentence he uttered once: “I never gave up on putting an intuition or an idea into practice, I never looked at the innovations of others without trying my hand at experimenting, so as not to have to say, ah if only I had tried! “. The second is an episode that involves Ilario and one of his drivers. The latter, talking to him at the end of a race, complained that he could not go strong due to the rupture of the tachometer. Ilario replied: “If, due to a gust of wind, the score flew away, do you think the orchestra director would stop the orchestra? Of course not, he would continue to direct the music. In order to go fast on the track you must have an ear for the sound of the engine, you don’t need to look at the tachometer to know when to change gear ”.

Were there any visitors who particularly impressed you?
Once Sgarbi came. When he saw the Torpedo with the unpainted bodywork, then covered with this simple layer of aluminum, beaten by hand with a hammer and modelled with sandbags, he exclaimed: “This is art!” But what surprised me most of all was the King of Sweden, who came to visit the Collection after participating, incognito, in the Mille Miglia. He was extremely knowledgeable about Bandini, and he reminded us that a Bandini 750 with a 3-stroke Saab engine, driven by Gene Parsons, had achieved much success in the United States.

What does the Motor Valley mean to you?
It is the tool we can use to enhance the motoring heritage of this area. Almost all visitors, when they arrive at the Collection, have just been or are about to go to the Ferrari Museum, the Lamborghini Museum or one of the other collections scattered throughout the region. Thanks to the Motor Valley this rich variety can be appreciated, and made more and more attractive for all admirers and enthusiasts.