Campioni in Piazza²: the party that on December 15 will celebrate Ducati’s double World Title in Bologna. 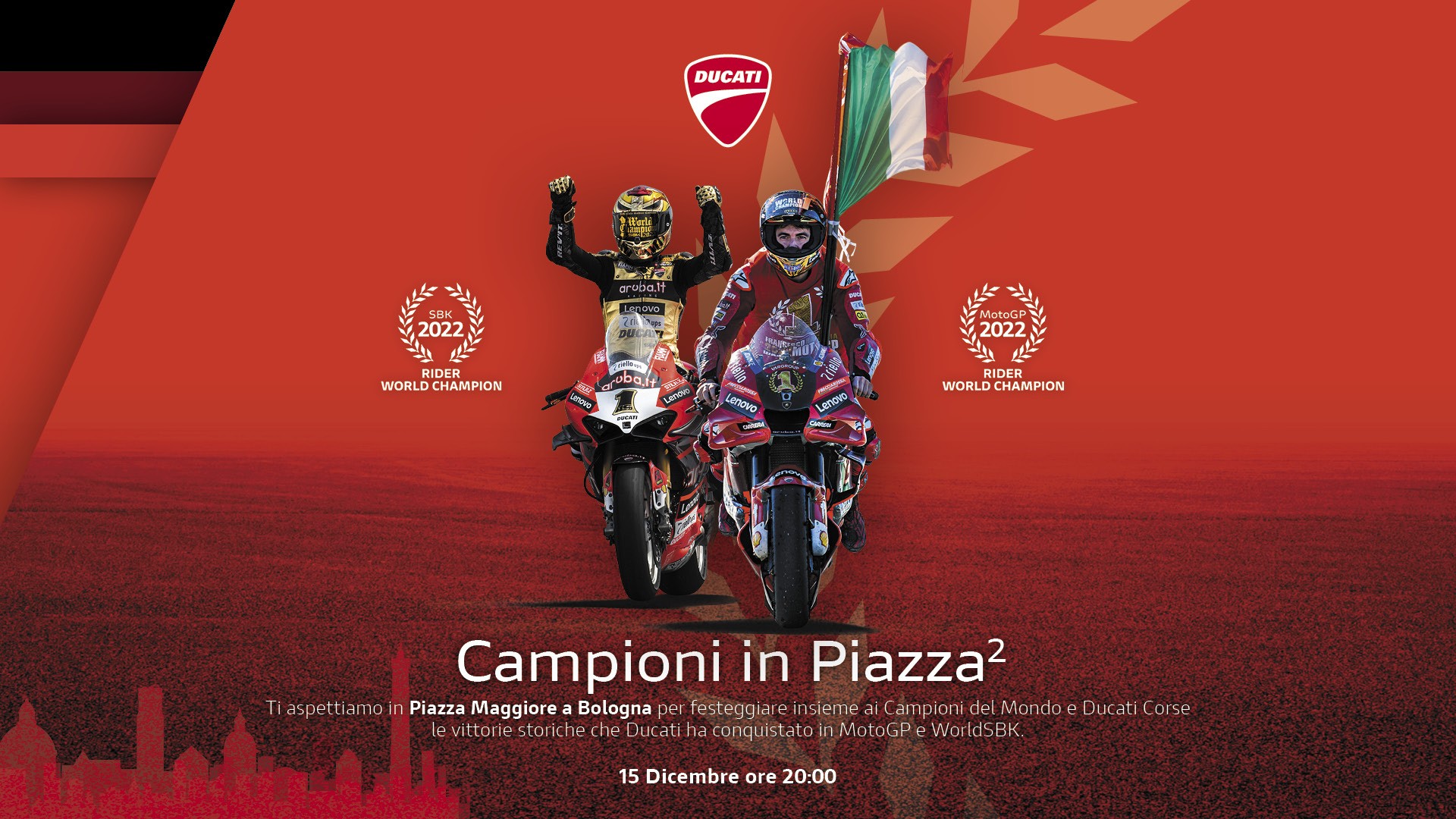 Just over few days remains before Campioni in Piazza²: the event in the heart of Bologna, free and open to all enthusiasts, which on 15 December will colour Piazza Maggiore red. It will be a great occasion to relive and celebrate together the unforgettable sporting season that has just ended and the extraordinary victories obtained by Ducati in the MotoGP and World Superbike championships.

The party on Thursday 15 December will involve first of all the undisputed stars of the 2022 bike racing season: Francesco Bagnaia and Alvaro Bautista. On stage there will also be the "behind the scenes" figures that fans have come to know live from the Ducati pits: Luigi Dall'Igna, Paolo Ciabatti, Davide Tardozzi and Serafino Foti.

Barbara Pedrotti, journalist, TV presenter and great motorsport enthusiast, will be introducing and interviewing the personalities of the world of Ducati Corse, together with Guido Meda, the unmistakable voice who, race after race, narrated Bagnaia's success in MotoGP on Italian TV.

The program will not be lacking in moments of entertainment either, with jokes from the Romagnolo and passionate Ducatista Giuseppe Giacobazzi. The actor and voice actor Luca Ward will accompany the participants on a journey through the history of Ducati. The musical entertainment opens with a DJ-set by Fresco, a DJ and record producer known for his collaborations with Jovanotti, to then move on to the guitar notes of Bologna native musician Federico Poggipollini. The evening will conclude with a concert by J-Ax; the italian rapper, who has just announced his participation in the 2023 Sanremo Festival, will make the audience dance to a medley of his most famous songs.

To celebrate this great milestone, Ducati has prepared a surprise for the most passionate Ducatisti, which will be unveiled directly from the stage in Piazza Maggiore.

The event is free and open to all enthusiasts who want to celebrate together with Ducati. The stage entertainment will start at 8.00pm and conclude at approximately 10.30pm. A spectacular fireworks display will bring the show to an end.

For everyone who wants to immerse themselves in the Ducati world, on the day of the party the visits to the Borgo Panigale factory will be intensified, with sessions starting every 15 minutes between 9.15 and 11.30 and between 1.45pm and 4.00pm. To ensure a place for the visit at the desired time, it is recommended to book and purchase the ticket online at https://tickets.ducati.com/. The Ducati Museum will be open as usual from 9.00 to 18.00.