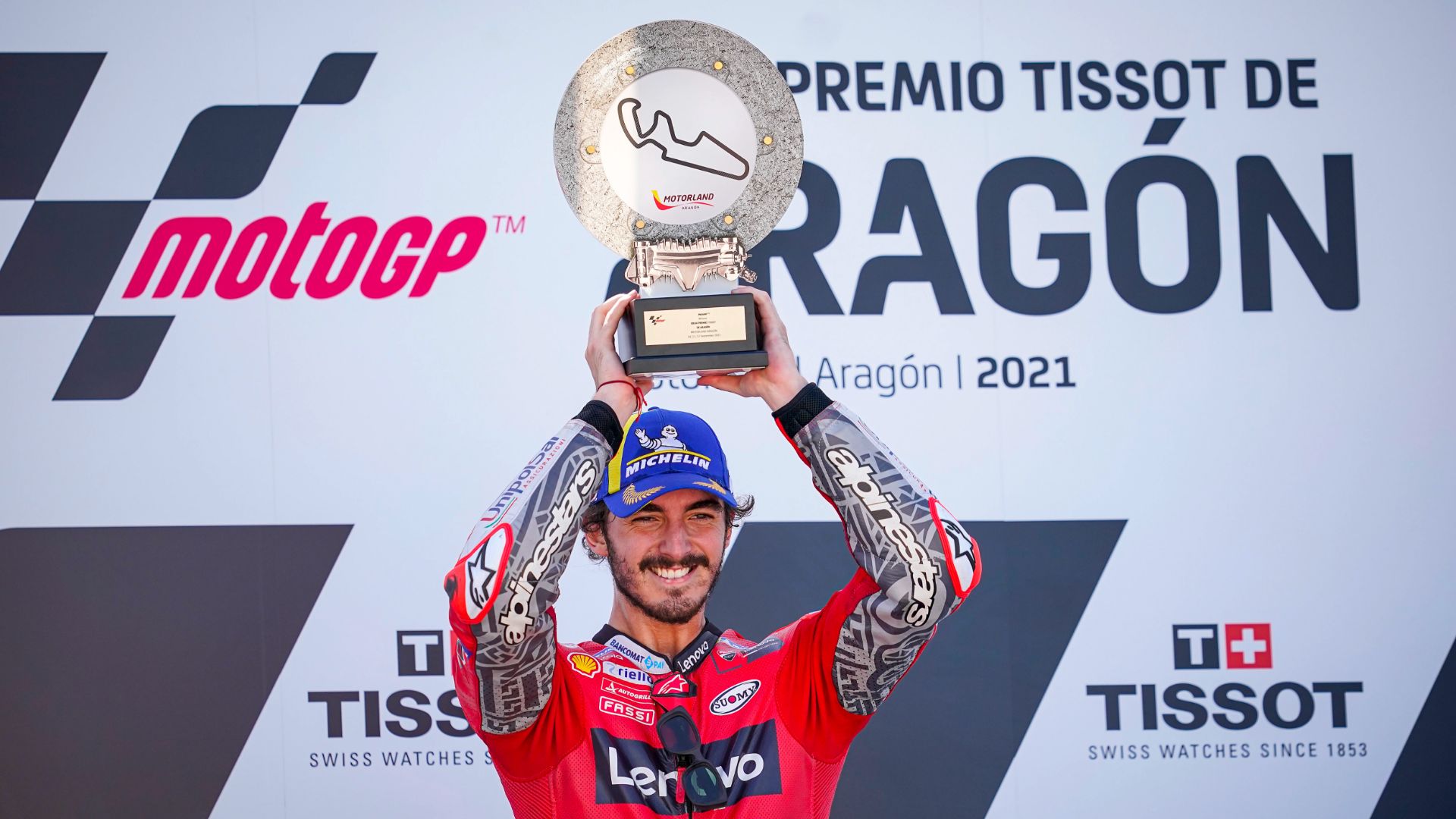 The MotoGP Grand Prix of Aragón, held this afternoon at the MotorLand Aragón in Alcañiz, ended with an extraordinary victory for Pecco Bagnaia, who secured his first MotoGP success. The Ducati Lenovo Team rider, who took pole position yesterday (the 50th premier class pole for Ducati) and first also this morning in the warm-up, produced a masterpiece today. As he took the lead after the start, Pecco held on to it from start to finish and held off Marc Márquez, who was always close to his Desmosedici GP 21.

With three laps to go, the Spanish rider started to attack Bagnaia, who could respond to them, remaining firmly in the lead. After a fierce duel on the last lap, the rider of the Bologna-based squad was finally able to get the better of Márquez, crossing the finish line in the first place with a gap of 673 thousandths on his opponent. Second, in qualifying, Jack Miller closed the thirteenth round of the 2021 MotoGP season in fifth place. Third, after the first lap, the Australian rider tried to follow his teammate and the Spaniard, but a problem towards the second part of the race led him to make a mistake. Miller went wide and was passed by Mir and Aleix Espargaro, finishing in fifth place, where he eventually crossed the line. After today's race, Bagnaia remains second in the overall standings, 53 points behind leader Quartararo, while Miller is fifth, 85 points off the top of the standings. Ducati returns to the top of the manufacturer's standings, while the Ducati Lenovo Team is second in the teams' standings.

Francesco Bagnaia (#63 Ducati Lenovo Team) – 1th "Today's victory was really incredible. We knew we were strong, but also that Marc Márquez is particularly fast on this track. When I took the lead, I tried to push right away because I knew he was behind. The last four laps were tough, and I couldn't wait for the race to finish because he kept passing me. In the end, we did it, and it is an indescribable emotion. Today's win was not taken for granted: I came here with lots of questions, as I had never managed to be fast and finish the race in the points since 2019 until now at the MotorLand. Instead, this year, since FP1, everything has been perfect. I'm thrilled."

Luigi Dall'Igna (Ducati Corse General Manager) "It was an incredible race, and I'm so excited. Pecco was amazing! He really did a masterpiece, riding flawlessly and beating a Marc Márquez who showed his form today. This first win was crucial for Pecco, and he deserves it, as do all the guys at Ducati Corse who have worked so hard to achieve this victory. I'm really happy".