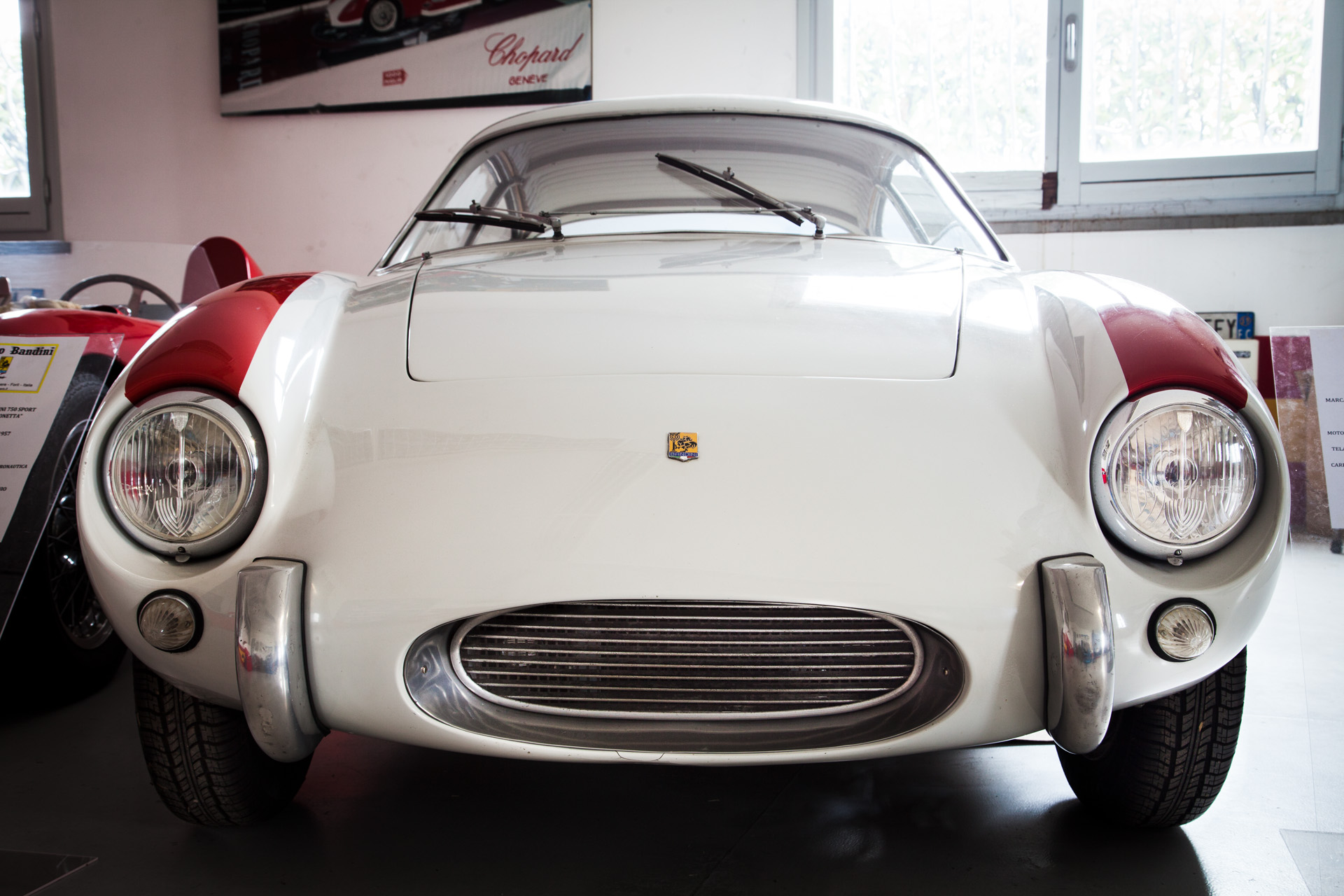 Bandini GT 750 Zagato: the car with the story that made history

Who knows what the other motorists must have thought, seeing that car completely without bodywork, driven by a man sitting on a fruit box.

Maybe they didn’t even notice it. The fifties were underway, the economic boom could be seen in the streets of the whole country, and nothing was surprising because nothing seemed impossible.

But certainly no one would have imagined that this makeshift cart would become one of the most fascinating cars in the history of motor racing. Nor that that pilot, whose precarious driving situation made him seem even smaller than he already was, would have unknowingly given rise to an one of the most iconic and winning ideas in the history of design.

A unique Gran Turismo of its kind

The car in question is the Bandini GT 750 Zagato of 1955, and the man behind the wheel is of course his father the creator Ilario Bandini, designer and builder, mechanic and pilot, self-made like all the cars of the car company named after him.

The models produced by Bandini, unique in almost all cases, were mainly intended for sports competitions. The Bandini 750 Sport Siluro for example, was a car built on an ultralight aeronautical chassis and equipped with a Crosley 4-cylinder engine transformed by Bandini himself into a pure power DOHC engine, which guaranteed the small company from Forlì many triumphs in the Sports Car Club of America championship and immense popularity on the other side of the world.

The chassis and engine of the Sport Siluro provided Ilario Bandini the starting point to create a road car, the first two-seater covered to wear the Bandini crest, a rampant cockerel and a caveja that well symbolized the city of Forlì and the stubbornness of this enterprising man from Romagna.

A journey that will mark history

The berlinetta upholstery was entrusted to the famous Carrozzeria Zagato. Ilario then brought the car completely devoid of bodywork and seats, equipped only with the trellis frame of elliptical section tubes and the engine (the famous 750 Bandini bialbero second series with tile) from Forlì to Milan.

His efforts were thoroughly rewarded. Wider, with the engine at the front and spoked wheels, the Bandini GT 750 left the Milanese atelier incredibly beautiful and appealing. 1.14m tall, less than 4m long, it was immediately very compact and light and with a well-defined style. Only one was evert produced. In 1957 he won first prize in the “Rimini elegance competition”. From 1959 he began his competitive career overseas where, led by Victor Lukens and Fred Haynes, racer of the Racemaster team, he competed in circuits as famous as Daytona and Sebring and won the prestigious Watkins Glens race.

The double heritage of a dream

Today the Bandini GT 750 Zagato is proudly displayed in the Bandini Automobile Collection, the museum curated by Ilario’s nephew Dino Bandini. Which has recently been restored, giving the car a unique splendor and beauty.

But the legacy of this car goes far beyond the enjoyment of the visitors who admire it in the Collection and the enthusiasts who see it at vintage car shows. And that always has to do with that incredible journey of fortune from Forlì to Milan.

Despite his expansive character, Ilario Bandini was instead a man of small stature, who in designing and creating his cars took himself as a reference to test the ergonomics of the car and the pilot’s seat. When the car was completed, Ilario was very comfortable in the driver’s seat, but in Zagato they realized that middle-height people would hit their heads. When Carlo Abarth requested new bodywork, Elio Zagato decided to test the solution he had imagined to enlarge the interior of the Bandini GT 750.

And so they applied a double roof swell to the new Fiat Abarth 750 GT. The double hump, which increased the space for the pilot and passenger heads, was also a winner from the design point of view and Zagato decided to make it his unmistakable trademark, thus creating an icon of incomparable luxury and elegance for the entire automotive sector.

A long and adventurous story – the story of Ducati – that all started with three brothers, one dream and an object that has absolutely nothing to do with motorbikes: the radio. The Borgo Panigale brand faced numerous challenges and underwent several changes before achieving the legendary status it enjoys today as global two-wheeled industry benchmark.