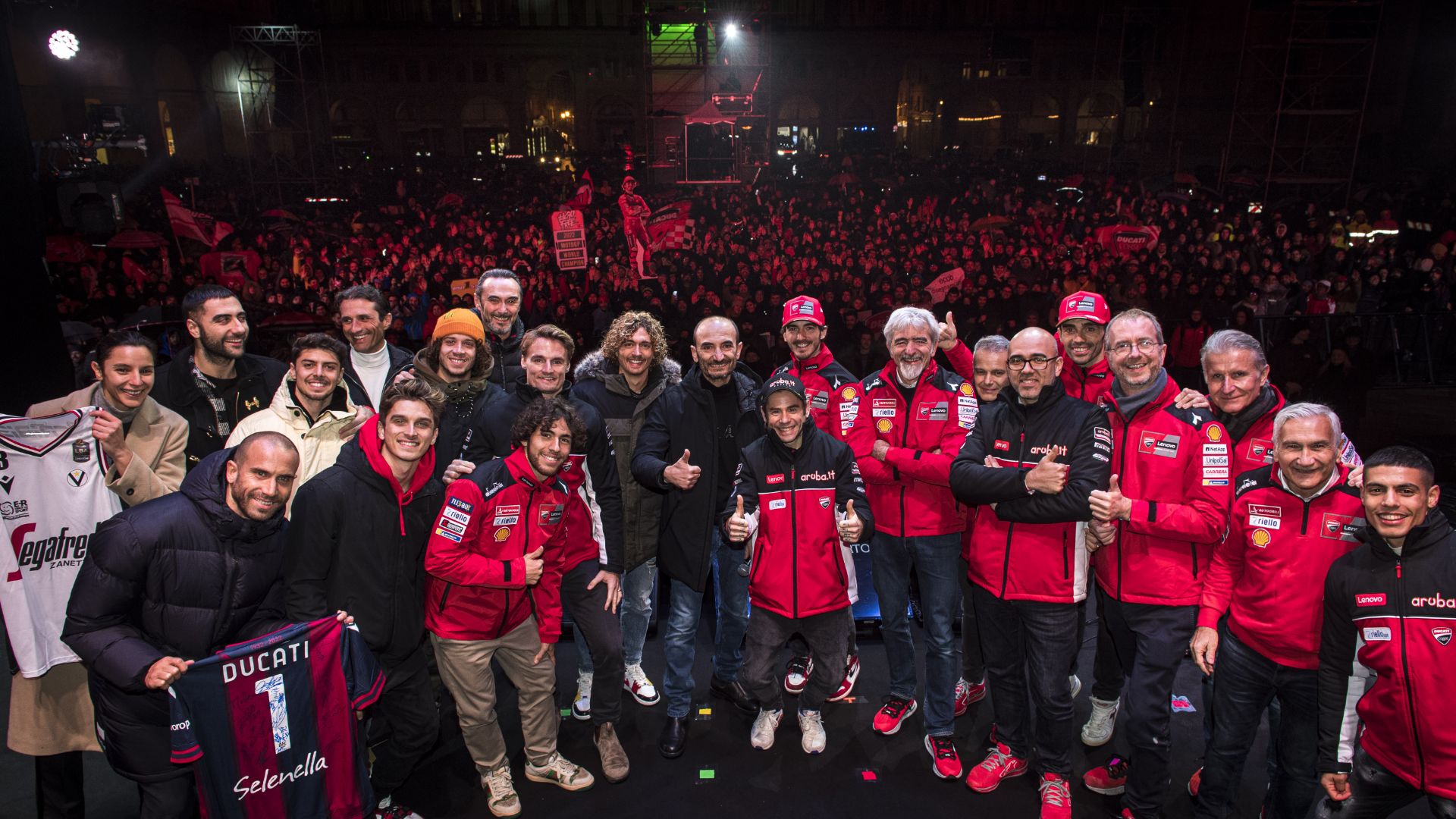 The streets of Bologna and its central square, Piazza Maggiore, were coloured in Ducati Red for the celebrations of an unforgettable 2022 racing year, which saw the Ducati Corse heroes conquer the Riders', Constructors' and Teams titles in the same season in both major motorcycle world championships: MotoGP and WorldSBK. An unprecedented triumph for the Borgo Panigale motorcycle manufacturer, which in this way wished to share this incredible joy with the Ducatisti and with the territory in which the company has always had its roots.

Francesco Bagnaia and Álvaro Bautista were obviously the stars of the evening. From the stage in Piazza Maggiore, the World Champions received a tidal wave of affection from Ducatisti enthusiasts from all over the world, who could not fail to miss this historic moment of celebration, despite the rain and the cold temperatures. The city of Bologna, the Emilia-Romagna region and all of Italy celebrated together with Ducati the successes of a company that draws strength every day from its history, well rooted in Borgo Panigale, and at the same time is honoured to be ambassador of "Made in Italy" all over the world.

A big surprise for all Ducatisti

During the "Campioni in Piazza²" event, a big surprise was also unveiled for all the most passionate Ducatisti. To pay homage to the world titles of Bagnaia and Bautista, Ducati has in fact created two special series of Panigale V4 in limited and numbered editions, with liveries inspired respectively by the Desmosedici GP22 and the Panigale V4 R of the World Champions and with dedicated components. These collector's bikes are characterized by having the liveries of Pecco Bagnaia #63 and Álvaro Bautista #19 and each bike is made unique by having the original signature of the rider on the fuel tank, protected with a layer of transparent varnish. In their production numbers, the two bikes celebrate the year Ducati was founded, 1926. Each series will in fact consist of only 260 units.

During the press conference that preceded the event, the documentary "Nuvola Rossa: Bagnaia & Ducati's Perfect Comb1nation" was also presented, a short film that illustrates the most significant and exciting moments of the last three races of the MotoGP championship. The 20-minute documentary is available on Ducati's official YouTube channel and on Ducati.com.